Meredith holds the dead bird in both hands. Last week, it was a sparrow, small enough to nestle in the cup of one palm. This morning, it’s a wattlebird. She brushes the dirt from its feathers and smooths its wings to its sides. The lifeless head lolls against her fingers. There are two clear puncture wounds on its breast; spatters of blood stain the brown stripes.

Meredith scans the houses on her court with narrowed eyes. Across the road at Number Five, the fat tortoiseshell is sunning herself on the concrete driveway. The ginger tom from Number Three is perched in his favoured spot on the sill of the large bay window. This means nothing; Meredith has seen him outside often enough. She has spotted another cat from time to time as well, a lean streak of tabby whose home, like its current whereabouts, remains unknown to her.

She doesn’t know which one is responsible for the birds.

Nor which owners are irresponsible enough to let their pet stay out at night, despite the council curfew.

She has letter-dropped before, pleading with her neighbours to keep their cats indoors after dark, explaining the vulnerability of roosting birds and how easily they might be plucked from branch or nest by a night-stalking predator, all furry and fanged.

It is clear that letters will no longer suffice.

The man at the store said that fresh mince makes the best bait. Raw and bloody and impossible for any carnivore to resist, no matter how well fed it might be. Meredith has chosen prime beef. She leaves a bowl of it in the back of the cage trap, behind the pressure plate that will trigger the door once her quarry is safely inside. She has no inclination to harm the animal, only to capture it, to be able to brandish irrefutable evidence of its nocturnal expeditions in the face of its owner.

Meredith has no particular quarrel with cats, so long as their natural hunting instincts are kept firmly in check by human hand. Though, largely, she does prefer dogs. (Unconditional love is a hard trait to beat.)

She pushes at the plate with a stick. The door falls instantly, snaps shut with a metallic rattle and clang.

That night, she finds herself merely dozing, slipping but briefly into the shallowest of slumbers before startling awake again. (And again. And again.) Only after she hears the unmistakeable snap of the trap being sprung, followed by a thin, low-pitched yowl, does she nestle into her pillows and sleep.

The animal she has caught is huge, its fur black and bristling through the wire mesh. Meredith isn’t even certain that it is a cat, the shape of it is so confined, so compressed. It seems to fill the entire trap and she wonders at how it managed to squash itself so completely inside that the door was still able to latch closed behind it.

She doesn’t know what to do next. She has never seen the cat—if it is a cat—around the neighbourhood and so hasn’t the foggiest idea to whom her captive should be presented. Nor, if it is the bird-killer, does she want to release it. If she surrenders the beast to the council pound, they might simply euthanise it as a stray without even bothering to find its home. (She has heard stories, read them in the letters section of the local paper.)

Meredith wishes the cat no harm—it should not be faulted for merely following its nature.

She lifts the cage by its handle; it weighs surprisingly little. Inside, the cat begins to growl. A yellow eye glares amid the gloss of black fur.

The bathroom is the best place. Small, no furniture to hide beneath, its neat white tiles easily cleaned should the animal, from fear or fury, make a mess.

Meredith sets the trap down. As she unlatches the door and lifts it free, her fingers brush against that midnight pelt. The fur is soft, silken as the hair on a newborn baby. She dares another stroke, elicits another growl from the cage’s occupant.

You can come out now, she says, stepping back. No need to be scared.

A moment passes, or several, while Meredith holds her breath. Then that mass of black fur begins to ripple, begins to wriggle, begins to push itself from the trap until it swells livid and yowling and wrathful into the room. It’s a cat by form, certainly, but seems more akin to a small dog in size, something like a Kelpie, or perhaps a Border Collie. The yellow of its eyes has been all but eclipsed by twin saucers of furious black. It arches its spine and hisses, pink tongue curling between inch-long fangs.

The cat takes a step toward her. Claws make a tac-tac noise on the floor. Another step.

Meredith flees the room, slamming the door behind her. A heartbeat later, the wood reverberates with the impact of a solid, furry body. Meredith presses her ear to the door. She can hear the cat growling. She can hear its claws on the tiles.

And, beneath it all, she can hear her own blood pulsing hot through her veins.

The phone is a mute plastic puzzle in her hand. If her husband were still here, such an escalation would be his to deal with.  And although he did come back that first winter to repair the leaky garage roof, and again to prune the crown of the lemon tree, Meredith can hardly call upon him to remove a feral cat from her bathroom. They have agreed—they have both agreed; haven’t they?—to keep their lives, along with their problems, separate and apart. Right now, her husband is probably sitting down to breakfast with his new wife. (Not his younger, or thinner, or even much prettier wife. Just new.)

Briefly, she considers Mark. But her son is always so busy, always just heading out or behind the wheel or expecting an important call whenever she rings. (She can’t remember the last time he rang her.) Besides, she suspects he sides with his father—or would, if pushed. She doesn’t want to push him. Things are fine the way they are. He always remembers her birthday.

Instead, she calls her daughter, Kim, who immediately wants to know how the cat got into the bathroom, and then what the hell Meredith was doing mucking around with animal traps, for Godsake, and lastly, why she cared so much about the bloody birds in the first place. It’s just nature, right? Red in tooth and claw, wasn’t that what Coleridge said?

Tennyson, Meredith corrects her. It’s from a Tennyson poem. She can almost hear Kim rolling her eyes. Her daughter says that she’s already running late to drop Liam off at daycare, but since it’s her half-day at work she can maybe zip on over afterwards to help with the cat. She has to pick up some dry-cleaning on the way, and needs to collect Liam again by four, but if the thing with the cat won’t take long, then she supposes she can zip on over.

You could leave Liam with me today, Meredith suggests. I could pick up the dry-cleaning.

I’m not leaving my kid in a house with a feral animal, Kim says. There’s a pause, before she laughs. I didn’t mean you, Mum.

Meredith laughs as well. Of course you didn’t.

After two cups of peppermint tea and one hour of feigning nonchalance, Meredith can no longer wait for anyone to zip on over.

There is no sound from the bathroom. No yowling or growling, no tac-tac-tac of stalking claws. She smiles, relieved. The cat has calmed down, is probably crouched in far a corner, sulking. Carefully, she opens the door, or tries to.

Something presses against it from the other side. The door yields but a handspan and then, as Meredith pushes harder, a shock of black fur fills the entire gap, top to bottom. She jumps aside as a huge paw whips out. A paw the size of a Kelpie, or perhaps a Border Collie, and never mind the rest of the cat. The very tip of one claw snags across the skin of her wrist. Blood beads, then wells.

Meredith stumbles down the hall. Risks a glance over her shoulder.

That great paw is pulling the door inward, as fur bristles through the gradually widening space. Bristles and swells and spills itself beyond the tiled confines of the bathroom. (Cats are, in essence, a fluid; everyone knows this.)

Her blood is dripping onto the wooden floor. The cat is slowly filling the hall.

Meredith runs from the house. Slams the front door in her wake. Her slippered feet smear little crimson crescents across the porch.

She sits in the yard, beneath the Japanese elm, watching the windows. Though the scratch has long since clotted over, her wrist is sore. She should put Savlon on the wound. She should fetch a warm coat. She should do many things. Her phone is in the pocket of her trackpants, but who might she call? Not her husband or Mark; they would find the situation preposterous. Or they would find her preposterous. (Or they already do.)

Her wrist itches. Meredith scratches at the dried blood. It flakes to the grass, leaving behind a line of soft black hairs that quiver beneath her touch.

She looks up at the windows again. The cat has grown so large now, its pelt is pressed tight against the glass; she can see the fur rippling as the animal curls through the neat and homely rooms that confine it. A massive yellow eye regards her from the top corner of the living room window. Rage locked in amber, for far too long. The eye blinks once, then disappears. (It isn’t gone; it will never be gone.)

Meredith brushes a finger over the hair growing from her wrist. She shudders. Deep in her belly, she feels the flex of newly sharpened claws.

And so Meredith sits, and she stares at the seething mass that fills her house, and she smiles at the possibilities that might be unfurled when at last she opens the front door and lets that bristling black cat loose into to the vast and boundless world.

Kirstyn McDermott has been working in the darker alleyways of speculative fiction for much of her career and her two novels, Madigan Mine and Perfections, have each won the Aurealis Award for Best Horror Novel. Her most recent book is Caution: Contains Small Parts, a collection of short fiction published by Twelfth Planet Press. When not wearing her writing hat, she produces and co-hosts a literary discussion podcast, The Writer and the Critic, which generally keeps her out of trouble. After many years based in Melbourne, Kirstyn now lives in Ballarat and is pursuing a creative PhD at Federation University. She can be found online (usually far too often) at www.kirstynmcdermott.com 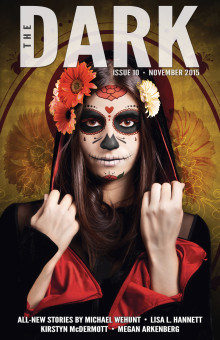